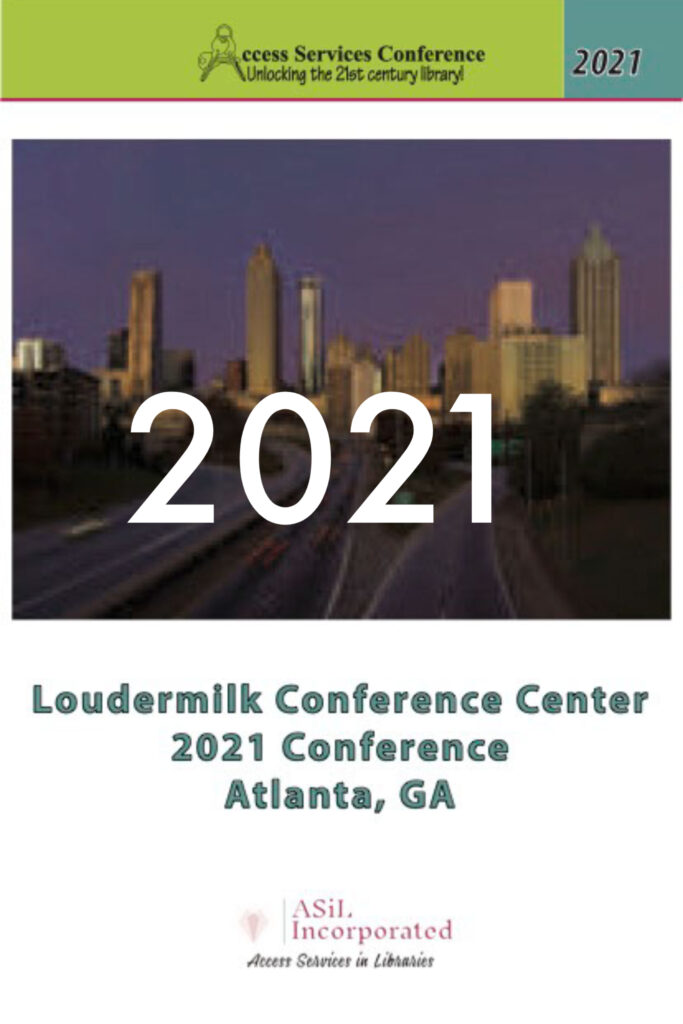 THE 2021 ACCESS SERVICES CONFERENCE WAS HELD AT THE LOUDERMILK CONFERENCE CENTER ON NOVEMBER 17-18 IN ATLANTA, GA.

The Keynote speaker for the 2021 Access Services Conference was CURTIS KENDRICK.

Curtis Kendrick is dean of libraries at Binghamton University (SUNY) where he manages the activities, services, collections and budget of the $14 million operation. As a founding board member of the SUNY Libraries Consortium, Kendrick led the planning team in the formation of the statewide consortium and as chair of the consortium’s Commercial Products Committee, led statewide negotiations for electronic resources resulting in annual savings in excess of $7 million. Prior to his position at Binghamton, Kendrick served as university dean for libraries and information resources at the City University of New York. In this capacity he provided leadership for 21-campus university library system serving 250,000 students. While at CUNY he pioneered the university’s efforts in open educational resources, established a system-wide resource sharing program, convened a national conference on assessment and developed a bridge program with the New York City public school system to support students transitioning from high school to college. Kendrick also initiated a faculty exchange program for librarians with their counterparts at two Shanghai universities, and promoted the first visit of a group of librarians/archivists from a U.S. university to Cuba once relations with that nation were normalized. Before serving at CUNY Kendrick was director of access services at Columbia University where he also guided programmatic planning efforts for the development of the Research Collections and Preservation Consortium’s offsite shelving facility, shepherding the work of representatives from Columbia, Princeton University and the New York Public Library. Kendrick’s work at Columbia built upon his experience at Harvard University as assistant director for the Harvard Depository. The Harvard Depository has become the model for how research libraries respond to collection overcrowding, and Kendrick was at the forefront of making this approach for the long-term offsite preservation of library collections a politically acceptable solution for the national academic community. Earlier, as head of circulation and reserves at the State University of New York at Stony Brook he oversaw a major book-stack expansion project, directed the library’s implementation of the circulation module automated library management software, instituted a program to recruit underrepresented minority students to the field of librarianship and as subject bibliographer for the African American Studies Department, worked closely with department chair, noted author Amiri Baraka. His initial appointment as a librarian was at Oberlin College where he served as assistant to the director and reference librarian. Kendrick has earned the baccalaureate degree in History from Brown University and master’s degrees from Simmons College (MS, library and information science) and Emory University (MBA). He is a member of the Beta Phi Mu national honor society for librarianship and the Beta Gamma Sigma national honor society for management. He was a 2002 Frye Leadership Institute fellow. Curtis Kendrick currently serves on the board of Ithaka. Formerly, as trustee of the Yonkers Board of Education he provided oversight for the $550 million public school system in the fourth largest city in New York State. He has also served as a trustee of the Yonkers Public Library Board (Vice President), and on the boards of the New York City Department of Education School Libraries Council, the New York University Polytechnic School of Engineering Enterprise Learning Board, the New York State Higher Education Initiative Board, and the board of MOUSE, a youth development organization. He has been active in the American Library Association and several of its subdivisions since 1983.